My stash is prodigious. It’s mine and my grandmothers with a few of my friends’ grandmothers thrown in. There was a time, in the not too distant past, that knitting was a dying art. So when people saw me knitting, I would get given all the spare yarn that hadn’t been used up.

One Fall when I was on sabbatical I took to photographing and cataloguing all of my yarn—at least the small portion of it that remained after I donated most of it to charity—about 75%. But don’t let that fool you, I’ve still got an immense supply which grows every time I go to a knitting event—much faster, I might add, than I can possibly knit it with a very busy full time job that never seems to end at the end of the day.

To second the Ravelry post on January 6th by MaryHeatherB “Tip: 3 Things to do on Ravelry in the New Year”, Tip #1 is to catalogue your yarn on Ravelry. I highly recommend that you go through the exercise. Now I tend to shop at home because I know what I have and in what quantities. And now that you can “slurp” in photos you won’t have the added hassle I had in photographing 200 yarns.

I’ve been knitting things for the women members of my team and trying to pick up a few new skills along the way leveraging free patterns on Ravelry. One didn’t go so well. I attempted to give Aran Cabled Shrug in Kaya Wool by Crystal Palace Yarns a more modern look by switching the ribbing to garter and adding increases to compensate for the lack of give. I love how it came out, but feel it is a bit too misshapen to give away—not to mention way too small for its intended receiver. I’m still trying to work out a closure for it that helps hide the underarm “bump”. 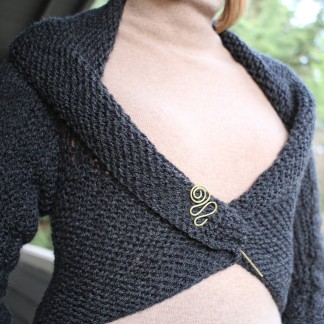 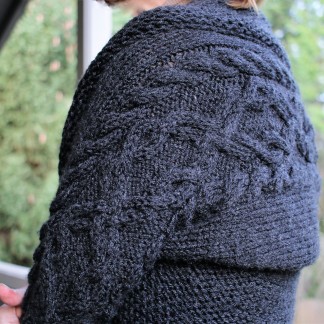 Next I turned to a different project that I ended up falling in love with—a Bias Scarf by Shelby Dyas. It came out so pretty (and heavy) that it hard to part with. I bought some Lion Brand Homeland in Bryce Canyon and paired it with an unidentifiable yarn in my grandma’s stash—a slick, nylon, ribbon yarn in burgundy by Malibu Mark which reminds me a lot of Anne Blatt’s Antique. 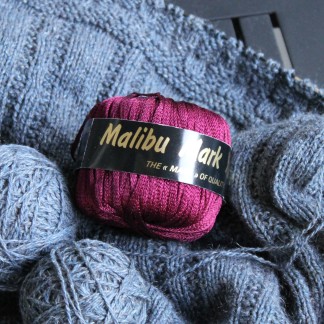 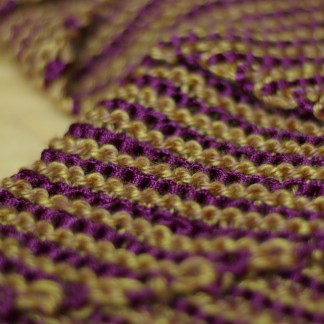 Close up of Sushma’s scarf

That’s when I got the idea to make a shrug from the pattern—a square you can wear. If it were wider it would be perfect and I knew of just the yarn to pair up with a bit more ribbon yarn—but this time of KNOWN origin, Lane Borgosesia Diamante in a variegated black-taupe-white and/or solid black. On the hunt I went and I came up empty. I searched by stash and it was not to be found. Where was it? I sold it!  And no doubt now these two beauties are probably knitted up, possibly together, in some gorgeous creation. 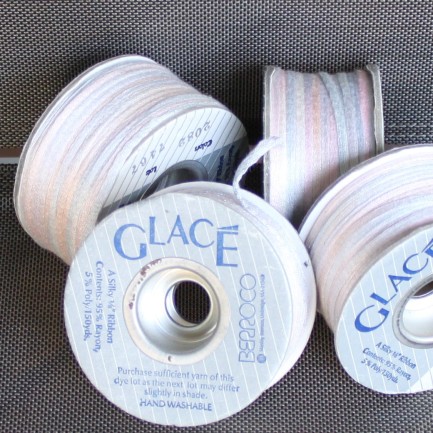 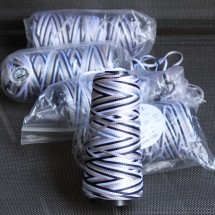 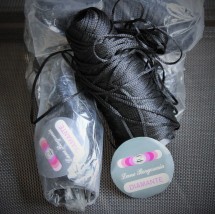 And there was this VERY old Berroco Glace variegated cotton-blend ribbon yarn which barely deviated from white in the palest of pinks and blue. I was purusing Ravelry, as I often do on weekends, and found a great summer top to use it up with, feeling so proud to be shopping in my stash. Firstly, I couldn’t find it in my stash, but I was certain I still had it so I went to my storage rack… Gone! Well, it wasn’t my color, I rationalized. Er, um. *sigh*

I’m happy to have them get used and there was no telling when I would have used them, so it’s for the best, of that I’m certain. What it did get me to do was “rethink” my trade or sale portion of my stash on Ravelry.