One of the things I loved about Knitters Magazine was that when Rick Mondragon first took over as Editor-In-Chief from the photographic genius David Xenakis, was the mandate to do more fitted designs. In one stroke there was an uptick in both fashion and complexity in women’s knitting. In honor of Rick’s transition from boxy to brilliant patterns, I wore my own extra-fitted version of the Knitter’s Design Team’s Lilac Top to Stitches West in Santa Clara, certain in the knowledge Rick had a hand in designing it. 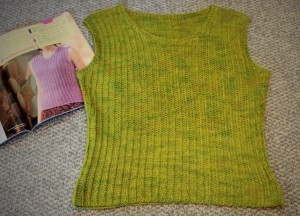 Craftsy Knit Lab: Fit your Knits, taught by Stefanie Japel (the handouts are fantastic!), is where I got the gumption to use two fitting techniques: extra needle size changes and seam edge reductions. The pattern needed loads of modification because it calls for a bulky weight yarn and I used a sport weight (Peruse in Sea Bright) hand spun yarn from the sadly defunct Art Fibers Studio. I was looking for yarn for a different pattern in Knit Scene, but in the end I went back to my standby of Knitters, remembering a pattern I’d always wanted to make. Needless to say, lots of math and swatching was required.

To create a light fabric I used size 6 needles as called for–I simply added more stitches to reach the right garment width. For reductions I first dropped to a size 5 needle earlier than the pattern called for and dropped to a size 4 needle for one inch at the waistline. Because of the skinny fiber, I had to also decrease at the edges to get the same width reductions a bulkier weight yarn would give in order to hit my measurements at the waistline. I decreased five stitches on both sides every other row from high hip to waist and then increased at the same rate until I hit the bust line.

I knitted it about 2 inches shorter than the pattern so it would fit under my suit coats and it does, perfectly. Not only does it hit my just above the jacket length, the sport weight yarn is less bulky and cooler. The bright color is perfect for spring and summer looks. I love everything except the color which would look great if only I were a brunette. Since this pattern require much less yarn, I had plenty left over to make a hitchhiker scarf for my Husband’s ex-partner who has lustrous chocolate colored hair.

There’s nothing new about fitted garments. Women’s patterns were highly fitted in the 1940s and 50s. But with the 60’s when loose flowy clothing became de riguer knitting pattern never seemed to recover. There was the occasional one in Vogue Knitting, but usually it was something I felt I wouldn’t really wear. In retrospect, as I look back at old issues (I was a subscriber of both) and I think how forward-looking those Vogue and Knitters were. They remain a go-to source for patterns—despite my habit of buying more books lately.

Interestingly Rick seems to be a fairly understated guy—though he’s riot when he takes the stage or teaches a class. He seems intensely private as evidenced by an interview with Faina Goberstein in 2010. Very much ‘just the facts, ma’am.’ And yet in person he’s larger than life. So is his design sense.

Speaking of Faina, I’m knitting one of her patterns right not for my husband (a blog for another day) called Simon, with all the modifications that accompany my knitting projects. In case you love her patterns like I do, she’s just launched a new website on March 22nd here.