A few of the projects I’m considering

With so many patterns to choose from and so much yarn in my stash, is it any wonder I have analysis paralysis?

Now that I’ve finished Under a Clear Blue Skye and frogged my Keeping Wurm in Seattle hat, I’m in a quandary. Sure, there is the palate cleanser WIP pillow cover project, but I’m bored with it because it is garter, HUGE and taking forever.

Adding to the dilemma is that I finally put almost all my pattern books in Ravelry. This was to stem be rebuying patterns I’ve already purchased in one form or another. This took a heck of a lot less time than the stash inventory, which was more than a week’s worth of photography and photo editing, to say nothing of the boxing and unboxing of nearly 200 yarns.

The upshot is I can now see that I have thousands of patterns. Combining that with yarn choices in my stash–if only I could manage to do that–makes the possibilities astronomical. To say nothing of the yarns I felt were in too small of quantity to catalogue. Those only clutter my mind…

Since much of grandma’s yarn is small bits of this and that (3-5 skeins), I can no longer blame grandma’s stash for the problem of having too much wool. When I buy yarn it’s usually wool and enough, each time, to make a roomy cardigan. So for a summer project I thought it would be time to dig into grandma’s “leftovers” and consider my options.

Even though I’m clearly Jonesing for cardigan I can wear on island—one preferably immune to the moths we’ve discovered infest the place–I set my mind on choosing something quicker, more portable and summery. Probably something I’ll finish just in time for the weather to turn cool.

It’s my way (the Tao of Kris) to always a season behind.

Here’s a pile of the things I’m considering. 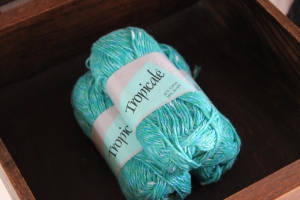 The Tropicale is bright, soft and beautiful, but I couldn’t find just the right pattern for it. Same with the Brunswick Casablanca. I didn’t see many worsted weight summer wraps or cardigan patterns.  It’s back into the stash for those…

I’ve been angling to make a friend a pair of man mitts and I settled onRobbin Abernathy’s Simply Ribbed Fingerless Mitts as a pattern after MUCH searching. He works as a kayak instructor and needs those fingers to be free. His partner suggested a pullover style, but I worry that will just get in the way of his work. I also fear a natural fiber won’t hold up to the rigors of his near constant ocean going adventures. He’s a “man in black” type and I’ve got enough of Bouquet’s Softee Knitting Worsted Premium to knit 10 pairs—at least!

I could pick up the frogged Wurm, but I’m too annoyed by the light yarn showing through on the dark when I carry it. It may be that the yarns just aren’t compatible and it will take too much non-knitting time to sort out. So I think this one gets a pass, for now.

Leftie has long been on my list and since I found out I have less of the Bernat Carioca than I thought (a hazard of discontinued grandma yarn) this would be put to better use as a scarf than a sweater. Combining the neutral colored linen with a beautiful Melrose Italian silk in scarlet. Seems promising!

I’ve also been angling to create a shorter version of my fingerless Warm Waffle Mitts out of a spare half ball of Tosh DK in cathedral. I’d have a new pattern I can use AND another pair of mitts. What’s not to like?

I could also knit a (yet another) Hitchhiker scarf. I’ve been meaning to make one for Nick’s oldest daughter out of the Valkyrie Yarn & Fibre Jayne I actually *did* buy for that very purpose last summer and haven’t gotten around to doing yet. The advantage here is that I’d have a gift at the end and I won’t be disappointed by missing a time window. It would be easy to do on my ferry commuting as well.

The project I’m leaning most towards (as evidenced by the time spent thinking about it) is Notched Hem Tack from Purl Soho. I started out swatching with the Carioca, which is how I discovered I didn’t have enough for the project. I then moved onto Reynolds Clover (yet another discontinued grandma yarn) and while the color is summery and the yarn soft and sweet, I just don’t like the color with my skin tone which means it would also be a gift—but for who? Not to mention I’m feeling a bit selfish after the massive Skye project eating up so much of my needle time.

I’ve been holding in reserve (because I do have quite a bit) some Brunswick Coolspun linen in the color Olive Pearl. Yes, it’s a thicker, and yes I could do something more substantial than a shell, I didn’t find a different pattern, so perhaps this will be a Notched Tank for me. Something says, this is the yarn for that pattern despite the difference in yarn weight. But is it the project for the summer?

That remains a mystery—for now.

Update: I selected the man mitts. Quick enough to finish in a weekend leaving me clear headed to select the next major project.