Most people will not get the reference the title makes to the movie Ladyhawke where a solar eclipse breaks the curse of two lovers, played by Rutger Hauer and Michelle Pfeiffer, locked apart from one another unless they see each other during this celestial event.

My husband and I, like so many others seeking the path of totality for the eclipse, converged on various, mostly remote places to view the sun overtake the moon in the day and enter twilight. And while total eclipses happen every single year, I’ve been anticipating this one because it was so close and would be my first viewing of a total eclipse.

It was an amazing couple of hours—starting just after 9:05AM and lasting until after 11:15AM. Totality lasting ~1:38 minutes and in that short time birds cried, newts surfaced on the pond, and there was a general sense of trepidation.

I’ll admit that before this week I did not know there was a Willamina, Oregon or a Huddleston Pond Park, but I must say I’ll never be able to forget the place. Such nice people, mostly locals. “Park over here.” “Get ready everyone!” Cheering at the totality. They were half the fun! Luckily, we had extra ISO certified glasses so we handed them out to those without so we felt like we gave back a bit of their generosity.

But rather than talk, let me show you, … 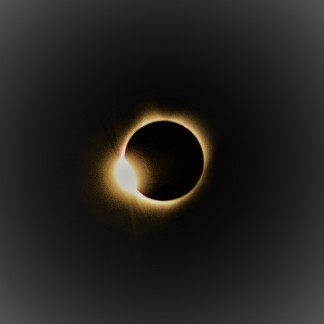 Getting close to complete

The last flash before totality