I have my challenges working a more than fulltime job in the city and living on an island. I don’t commute every day (which would be about 3-4 hours each way), I mainly just go home for three days and stay in the city for four days. If the internet was decent (a gripe for a different day) I would probably only go to the mainland for 24-to-48 hours at most and probably not every week. But it’s terrible—and that’s being generous.

This summer one of the Washington State Ferries, our newest, the Samish, had one of the two engines fail (they have for each direction). As a result, more than once, I got left high and dry with my reservation cancelled making everyone a standby passenger.

And after watching my favorite airline, Kenmore Air, ferry the rich and famous off the island while I roasted in the standby lane at the ferry terminal for the second unexpected time in a month, this week I opted in for a treat—that’s right—to fly rather than drive. It’s about a 45-minute flight from South Lake Union in Seattle, though I used to travel via their headquarters in Kenmore. But since Kenmore Air always flies to Seattle to pick up passengers, there just isn’t a reason to drive 30 miles before getting on the plane. Besides, this week the hubby was already implanted, so he could pick me up at West Sound.

It was a foggy day, and unlike usual, I didn’t get to ride shotgun (a benefit of starting in Kenmore) so I didn’t get much of a view, but I did get some knitting done on my latest lurid pink version of Stefanie Japel’s Perfect Periwinkle Turtleneck Tube Vest

Knitting while flying to the San Juan’s 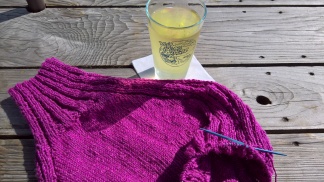 The cider on arrival at West Beach Resort

More on that to come…

2 thoughts on “The Commute from Heaven?”